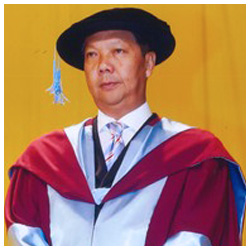 He began his early career at sea – sailing on various merchant vessels and has today over 40 years of experience in the maritime industry. In the international arena, due to experience and vast knowledge, he was elected by the Paris-based Bureau Veritas – one of the largest international ship classification societies – as a member of its Sub-Committee for Asia-Australia. He was also a Board Member of the prestigious UK-based North of England Protection & Indemnity Insurance Club for ship-owners worldwide.

In 2001, he was selected as a Fellow of the Chartered Institute of Logistics & Transport (UK) and in 2003 he was made a Fellow of the Malay Chamber of Commerce, Kuala Lumpur. In the same year, he was appointed the head of Maritime Committee of the Malaysian Industry-Government Group for High Technology (MIGHT).

Tan Sri Halim Mohammad served the government as the Director and Chairman of the Malaysia External Trade Development Corporation (MATRADE) from 2004 to 2010 and he was a Board Member of Universiti Teknologi Malaysia. He was again re-appointed as Chairman of MATRADE in January 2019 and in April 2005, he was commissioned as an Honorary Captain of RMNRV of the Royal Malaysian Navy. In August 2005, University of Malaya conferred on him an Honorary Degree of Doctorate in Business Honoris Causa (HonsDBus) of which he was also an Adjunct Professor at the same University. Recently in August 2020, Tan Sri Halim Mohammad was appointed as an Authority Member with the Civil Aviation Authority of Malaysia (CAAM), a government agency under the Ministry of Transport. Tan Sri Halim’s appointment is set to drive greater success and achievements towards the management of the safety and security of the civil aviation.