You are here: Home / About Us / Chancellory Office / Dato’ Sharifah Halimah Syed Ahmad 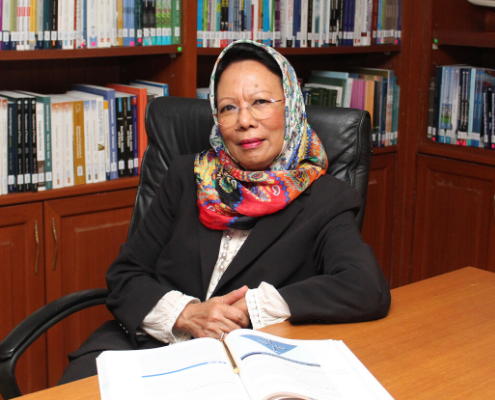 Dato’ Sharifah Halimah is holding the position of Deputy Vice Chancellor, Business Development, MERITUS UNIVERSITY, a newly established niche university focus on maritime, aviation and finance programmes since June 2015. Sharifah had been in the education sector since 2009. Prior to joining Halim Mazmin Group, Sharifah was responsible in setting up the automotive college, International College of Automotive (ICAM), in the royal town of Pekan, Pahang. She was the first Chief Executive Officer of the automotive college. Upon serving the DRB-HICOM Group for 33 years, Sharifah retired in December 2014.

Sharifah hailed her involvement in the logistics and transport sector back in 1995 when she was appointed as the first Chief Executive Officer of KL Airport Services (KLAS), the second national ground handling company in Malaysia, responsible in setting up the cargo handling operations, ramp and passenger handling and aircraft maintenance operations at Kuala Lumpur International Airport and Penang International Airport. Her thirteen (13) years in the sector had driven her to be a person who is consistently conscious of quality and delivery. Sharifah is also one of the few people who are considered to be “a greenfield” person, ie conversant in developing projects from the start up stage till operation. Sharifah was the founding Director of AirAsia.

Her focus, committed and driving character with vast experience in the start-up projects had placed her to be a women leader who has great passion in developing women talents in the sector. She is the Project Technical Representative of the Malaysia National taskforce of the Asia Pacific Economic Cooperation (APEC) Women in Transportation (WIT) whose focus on creating women’s professional growth potentials in seaports of Malaysia in support of the Government’s diversity agenda.

Sharifah passion and keenness in sharing her knowledge and experience in developing women talents had placed her to be involved in several NGOs. She is WiLAT Asia Forum Convenor, an Executive Committee member of Badan Iktisas Malaysia (BIM), Professional bodies of Malaysia leading the BIM Professional Women (Working Committee), She is the Honorary Treasurer, Malaysia Women Graduate Association of Malaysia (PSWM) and also Treasurer and Secretary of Trust Funds of Tabung Dasiswa PSWM since 2000.

A graduate in Mass Communication (Advertising) from UiTM and a Master in Business Administration (MBA) from Case Western Reserve University, Cleveland, Ohio, USA in 1981.